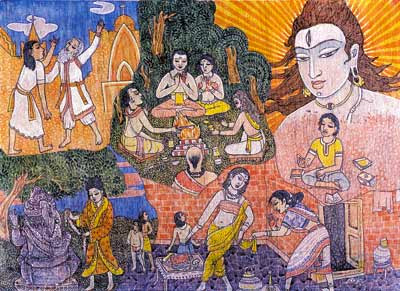 (This is the third part of a series of articles on Hinduism. Here are the earlier parts, Part One and Part Two.)

Dharma is divided into two groups: sāmānyadharma (general or universal principles) and viśeṣadharma (special or particular principles). Sāmāyadharma includes all basic values which don’t change with space and time. They are applicable irrespective of distinctions of gender, race, caste, creed, occupation, nationality, etc. They comprise what we would call human values today – truth, non-violence, non-avariciousness, purity of thought, speech, and action, self-control, empathy, forgiveness and so on.

Viśeṣadharmas are spatio-temporal in that they are relevant only for a particular time and place. Some of the viśeṣadharmas are āśramadharma (the traditional duties of individuals at different stages of life), varṇadharma (the traditional duties of people of different temperaments), rājadharma (duties of rulers), and āpaddharma (duties and exemptions applicable during adverse situations). The specific injunctions of viśeṣadharmas are only relevant to a particular place and time but the general notions are universally applicable. For example, the rules that were laid down for a king might not be relevant today but the idea that governance needs guidelines will remain forever. The beauty of the Indian tradition is that there has been a constant re-interpretation of these concepts to suit the place and time. This subtle dynamism is what makes Hinduism a very robust way of life.

Irrespective of the category of dharma, the essential qualification for a true adherent of dharma is the constant accountability – here and now – of thought, word, and deed. There is no place for a preacher who does not practice when it comes to dharma. One of the words for teacher in Sanskrit is ācārya, which means one who himself adheres to the principles that he espouses. The ācārya is truly aware of what he is teaching. Indeed the aspects of learning, teaching, and practising merge in one who is a true ācārya.

Another interesting aspect of dharma in the Indian tradition is that it doesn’t blindly toe the line of morality. It judges from an ultimate perspective and not a mere materialistic one. For example, being honest normally refers to verbal sincerity and being non-violent refers to not hurting others. These values maybe transgressed for a greater cause – a son might lie to his aged mother to save her from a rude shock, a police officer might violate traffic rules while chasing a criminal, a surgeon might amputate a patient’s leg to save the latter’s life, a teacher might punish a student to help the latter mend his ways. Can these be counted as cases of dishonesty or violence? In cases like this, we naturally consider the intent of the people involved and the results of their action. In this regard, sanātana dharma upholds the actions of people who are selfless and self-realized with good intentions even if their chosen means are not ‘moral’ by the textbook definition.

There is a nice episode in the Karna Parva of the Mahābhārata where Arjuna and Yudhishthira are having a heated argument with regard to maintaining their oaths. Krishna pacifies them by giving them an exposition on the nature of truth and declares: “yad bhūtahitamatyantam tat satyamiti dhāraṇā” (truth is that which is good for all beings, that which is good at the universal level).

The seers of ancient India gave importance to the implications of facts and values both within and outside the purview of mere faith. On the one hand, they did not completely exclude faith from philosophy and on the other hand, they did not try to explain everything within the narrow framework of faith. They approached facts and values from logical and intuitive, emotional and intellectual, practical and mystical, realistic and idealistic, and materialistic and spiritualistic perspectives. Therefore, their understanding of fact and value has been free from biases and are thus applicable universally.

What separates facts and values? We always comprehend facts readily because they are perceived through the senses. There is not much to discuss or argue with regard to facts. They are objective. We realize values through our experience and hence there arise several diverging opinions and views. They are subjective.

Values are not ready-made or even fabricated like facts. Facts are an ever-growing body of data from the world around us. We rarely gather facts for the heck of it; facts are often used for purposes other than themselves. However, values are almost always pursued for their own sake. Further, once we understand a fact, it need not concern us or relate to our life. But that is not the case with values. Once a value has come within the grasp of our understanding, it has indeed, become a part of our experience. If that is not the case, then we have not truly realized the value but instead have only an idea that we’ve grasped with our intellect.

The non-materialistic nature of values makes them elusive in the material world. Values are not perceived through our physical senses but are felt in our consciousness. Let us take a simple example of a glass of water. Water is a fact and so is the glass. Where the water came from, and how the glass was fashioned, are also facts. But drinking the water and quenching our thirst is the realization of the value.

Continued in the next part.

(The series was earlier published on www.indiafacts.org.)