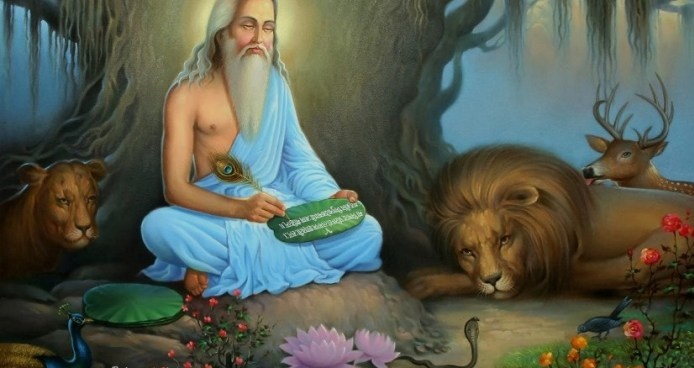 Kalidasa has probably provided us with the finest pictures of the simple, unsullied and pure life led by our Rishis in hermitages. These pictures are among the many things that he has pioneered in the Indian literary tradition.

We shall have the privilege of looking at a few of them beginning with the hermitage of Rishi Vasishta on an evening as seen by King Dilipa in Raghuvamsham.

When the wives of the sages were taking the sun-dried grains back into their huts, they were stopped at the door by deer demanding their daily share of grain. They appeared like the children of those women for the liberty and love they enjoyed.

The young girls of the hermitage would fill the trench around the root of the trees with water and quickly walk away from there. This was to allow the birds to quench their thirst without any fear from anyone being present around them.

The grains which had dried during the day were piled up during the evening in the grounds of the hermitage. That served as a cushion for the deer which would sit and ruminate on those piles.

And then, we can look at King Raghu inquiring about the well-being of the hermitage of Sage Varatantu, when talking to his pupil Kautsa.

I hope the fawns of your hermitage are fine. They enjoy the comfort of the laps of your sages’ till the remains of their umbilical cords drop off and they also enjoy the luxury of feasting on the blades of grass collected by the sages for their rituals.

I hope the waterbodies in your hermitage which are used by the people of the hermitage for their ritual bath and oblations are hale and healthy. Their banks are littered with the grain offerings made by the hermits who believe in handing over a sixth of their share to the king.

And then, we can look at the advice given by Sage Valmiki to a pregnant Seeta, who is given shelter by him after she has been sent to the forest by Rama.

In our hermitage, you shall water young saplings from water-pots suited to your carrying. That way, you shall feel the joy of breast-feeding your kids even before you have given birth to them.

In Kumarasambhavam, Lord Shiva, in the guise of a Brahmachari enquires Parvathi about the well-being of her hermitage.

I hope you are happy with the liberty the deer take in snatching the blades of grass from your hand.

Here, the poet seems to imply that such wide-ranging compassion is the expected result of penance. And who better to talk about it than the primordial hermit, Lord Shiva? After all, he has accommodated everything from the deadly poison haalahala to the divine river Ganges and has no problems with snakes inhabiting his body.

Finally, we can see one glowing example of life in hermitages from the ‘play perfect’ – Abhijnanashakuntalam. When Shakuntala is preparing to leave the hermitage to go to her husband’s home, this is what she requests of her foster-father sage Kanva:

Father! Whenever the pregnant she-deer roaming around our hut here has a safe delivery of its baby, then please send someone to deliver me that good news. 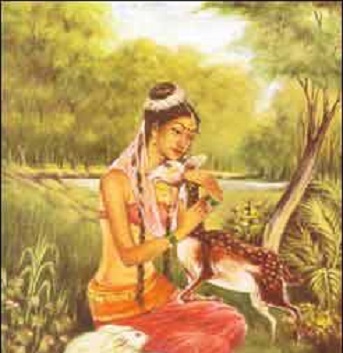 And then, she is waylaid by a deer who is described thus by sage Kanva:

Look at this deer blocking your way! It has been like a son to you. When it injured its mouth while eating the sharp blades of grass, you had treated it with ingudi oil. And it has grown up by eating grains out of your own hands.

With this, we shall take leave of the wonderful world of hermitages created by our master poet.

Continued in the next part. This Series was first published on India Facts.