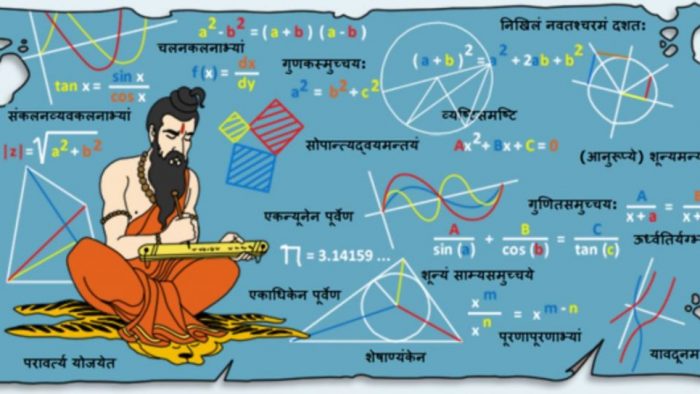 (Ancient Indian Mathematical Treasure is a new series of articles by Salil Sawarkar, introducing the rich mathematical heritage of our country. This is the first introductory article.)

To write a series of articles describing the glorious past of India requires strong reasoning. The author of such articles requires to introspect deep, and ask questions like what’s the reason to showcase the glory of the past. So far there has been no means found out or developed to go back in time. Time machine, even today, is a fancy or fantastic idea, suitable only in fictional books. We can’t go back in time, neither can we bring that dead past in present. So why to do any research, even at the basic level, to delve into the yesteryears’ manuscripts, even if those supposedly contain monumental work of our ancestors?

Are we trying to portray our great grandfathers as the supreme knowledgeable human beings? Do we feel that the ancient India was truly a supreme technological power? Is it really our firm belief that the whole modern knowledge/science, which has been gained by us from Western countries, was fully known to Indians? And is it actually so, that at some time in the past our airplanes were thrashed, test tubes were broken, and computers were stuffed with virus making them useless?

Such questions are interesting and a person born in this soil likes to nod affirmatively at each of these, for the very thought of our glorious past makes one feel elevated and raised. A natural thought springs in one’s mind: If our ancestors were scholars, then their legacy must have made us scholars too!

It’s almost a (historical) fact that our universities were smashed and the texts were burnt to ashes. The written treatise which is lost might have contained valuable stuff, but now their contents can just be surmised, these cannot be proved, unless… unless some new excavation at a different place brings up old manuscripts on surface, or some foreign university admits that it has a large collection of old Indian knowledge-packed books, or a scholarly person decodes the available Sanskrit verses, and throws light on the hidden messages in them. Unless and until this happens, a large proportion of the Indians will continue to just indulge in the bygone era, at the same time blaming the other cultures and countries, for looting and demolishing our knowledge stuffed scriptures.

It’s almost an undoubtable fact that a certain set of results, be those scientific or mathematical, was known to Indians; and that those rules were used in either this or that way, for several years, in fact, for several centuries. Even the European scholars have admitted that a large part of basic math and basic sciences was known to Indians. This acceptance from Western scholars has triggered an idea into the minds of several Indians and they continue to claim that all the modern science was known to Indians and that there is nothing “modern” for us in the so-called modern science.

However, the author has a little to say or achieve at this juncture. His goal is simple. There won’t be any false pretenses, neither any extraordinary claims. At the same time, the author doesn’t want to shy away from the facts and figures of the magnificent past of India. The whole idea of this series is to make common Indians aware of the enormous work of their forefathers, thereby generating a sense of justified pride in their minds; which might motivate them to take up the new challenges of creating and developing new ideas. As we go through the list of Nobel Laureates or that of Fields Medal winners or Abel awardees, we realize a negligibly small number of Indians in the list, scattered here and there, and this makes us feel depressed, despondent, and disappointed!

However, it’s worth to note that the decimal system is our boon to the entire world. The concept of zero is yet another milestone, achieved by Indians. Note that it’s not just attaching a symbol to non-existence of anything! Identifying the non-existence and then conferring the same with a symbol and thereby bringing it into existence is an epitome of our ancestors’ thinking! The decimal number system not only simplified the writing of numbers, it simplified the calculations too. And then the Indians were aware of the results of these operations on zero. Although the Indians were too competent in calculations, they were aware of silly mistakes, which might take place, even from veterans; and as a result of which, they developed methods of doing tally of the results.

Our ancestors were thoroughly aware of the negative numbers and their practical needs. While a pure mathematician would just accept negative numbers as mathematical objects, understand the way basic operations can be done on them and would go ahead creating more results, it must be understood that for a common man, the idea of negative numbers is not easily fathomable.

It seems that keeping this difficulty of common man in mind, the Indians used the terminology like profit (or gain) and loan (or loss) for positive and negative quantities respectively. Division by zero is a serious thing in mathematics and even today, this operation is illegitimate. Our predecessors were knowing about this serious problem of zero and therefore, some of them kept themselves away from this operation while the others did discuss about this. It is worth mentioning that they did not write any result of division by zero, carelessly.

“Nothing” was named and was tried to be identified by Indians in the form of zero. At the other extreme, Indians also tried to identify “everything”. Many scholars have tried to prove that the famous ‘shantimantra’ from ‘Ishavasyopanishad’, “Om poornamadah, poornamidam, poornaat poornamudachyate…” is actually trying to say something about infinity.

A pure mathematician usually tries to achieve the exactness, however, at times, getting exact answer is beyond possible. Practical mathematicians are aware of this limitation, and so they are ready to accept approximate answers, and develop methods for getting (at least) approximately correct answers, too. It is worth noting that this approach, although practical, is nowhere new. Indians had a clear idea about this problem and we find several occasions into the history of Indian mathematics, where “nearly correct” answers to some questions are given, and then people were completely aware of this “nearly correctness”. The mathematicians have given values (or formulae to find the values) of the numbers, like pi and square root of 2, which are nice approximations of their exact value.

The command over calculations led Indians to explore many new fields, a prominent being Astronomy! As we go through the Sanskrit verses of the great mathematicians of this soil, we realize that they had attempted to find the radius of the mother earth, and were successful in reaching a number, which is really very near to the exact one! While admiring their methods or the logic behind the methods or their extensive efforts gone into finding the radius, one should never overlook the fact that such efforts clearly reflect our understanding about earth; spherical and not flat, since ages!

The study of Astronomy was done extensively by Indians and they had definite idea about solar and lunar eclipses, the time and type of the eclipses and so on! It’s interesting to note that a typical ritual called, ‘Sahasra-chandra-darshana’ is being followed here for last several centuries, and it is specifically stated that such a ritual should be observed when a person enters 80 (that is, after completing 79 years!), as in this period a person has definitely seen a ‘new moon’, one thousand times! In doing these calculations, all possible lunar eclipses too have been taken into consideration. Thus, without getting just scared of eclipses and while creating some fancy fables of demons trying to eat sun and moon, the Indians studied those and came up with the simple rules of nature, due to which these eclipses are created.

A detailed study of our ancestors’ efforts clearly shows that we had profound knowledge of many modern terms and concepts, like Binary numbers, Pascal Triangle, Fibonacci Sequence, Pythagoras’ Theorem, Pythagorean triplets, Binomial Theorem, Progressions, Infinite Series, Trigonometry, Values of sin/cos of various angles, Surds or Irrational numbers, Permutations, Combinations, and even Calculus! Another interesting part of this story is that they also worked on recreational mathematics like magic square, digital sum of a number and so on!

Why to study mathematics? What is the place of mathematics in today’s technologically advanced world? These two questions are crucial and the first is being answered by the community of mathematicians and educationalists or academicians for last several years. The importance of mathematics is being emphasized by those and so the author would like to refrain from answering this question. For the second question, it is better to quote what our ancestors have said:

Like the crest of peacocks or gem on the head of snakes, the mathematics occupies the place above all sciences!