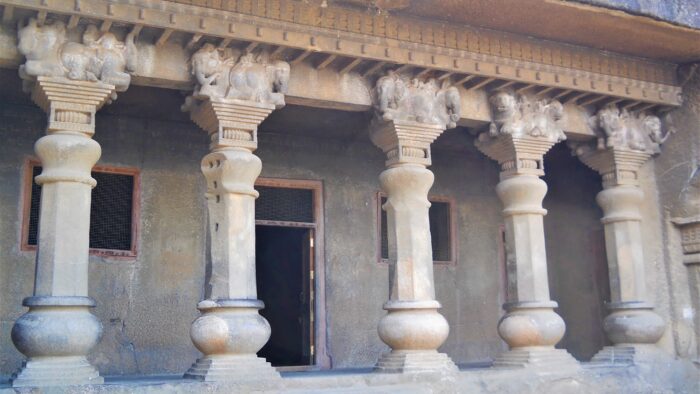 The Western Kṣatrapas who were of foreign origin held sway over a large part of Western India in the early centuries of the Common Era. They were divided into two main groups – the Kṣaharātas and Kārdamakas. Both these lines played crucial roles in the political, economic, social and cultural spheres of Ancient India. A very significant aspect of the rule of Western Kṣatrapas was that they embraced the indigenous religio-cultural traditions of India and gave generous donations to Hindu and Buddhist religious establishments.   In this article, we will be discussing the inscription of Uṣavadāta or Ṛṣabhadatta who was the son-in-law of the Kṣaharāta Kṣatrapa ruler Nahāpāna. Uṣavadāta was married to Dakṣamitrā, the daughter of Nahāpāna. The Western Kṣatrapas vied for power, both political and economic with the Sātavāhanas who were the other dominant power of Western India.

The inscription under study has been inscribed on the back wall of Cave No. 10, a Buddhist Vihāra in the rock-cut caves complex at Nāsik. The Buddhist establishment at Nāsik was patronised by the Sātavāhanas, Western Kṣatrapas and the Abhira rulers. The ancient name of the hill through which these caves have been excavated was Triraśmi (in Sanskrit) or Tiranhu (in Prākrit). Dr. V.V. Mirashi has stated that on the basis of the size of the letters and the language, the whole inscription was not engraved at one go. The inscription is in the Brāhmī script and the language is Prākrit with a heavy influence of Sanskrit. There are two other inscriptions of Uṣavadāta at Nāsik with another one at the Karla Caves near Lonavala. A number of scholars, both Indian and foreign have edited this inscription. In the present article, we have followed Dr. V. V. Mirashi ̍s edition. The present inscription is dated to the 1st century CE.

The purpose of the inscription was to record the excavation of a vihāra and water cistern by Uṣavadāta who introduces himself as the son of Dinika and son-in-law Kṣatrapa Nahāpāna, the scion of the Kṣaharāta lineage. The cave was excavated in the hill named Triraśmi Hill near the administrative centre of Govardhana in the vicinity of Nasik. The inscription talks about the various philanthropic and religious endeavors initiated by Uṣavadāta as well as some of his political achievements.

The Philanthropic Activities of Uṣavadāta

As per the inscription under study, Uṣavadāta is said to have made a donation of three thousand cows and also gave gold as gifts. He also got a ghāṭ or tīrtha constructed on the river Bāraṇāsa. Giving land as a gift was becoming a common practice by this period and Uṣavadāta donated sixteen villages to the Devatās and Brāhmaṇas. The reference to villages being donated to Devatās could imply the transfer of revenue of certain villages to temples or āyatanas. Uṣavadāta arranged to feed a hundred thousand Brāhmaṇas every year. He also organised the marriages of eight Brāhmaṇas at the sacred place of Prabhāsa. Furthermore he donated quadrangular houses at Bharukachchha, Daśapura, Govardhana and Śurpāraka.

In addition to these, he created gardens as well as constructed tanks and wells too for the betterment of the people. He arranged for boats to ferry people across rivers like Ibā, Pāradā, Damaṇa, Tāpī, Karabeṇā and Dāhnukā. This was all a part of his charitable works. Moreover, he built rest houses and also arranged for sheds to be constructed to make free drinking water available for travelers on both the banks of these rivers. He made a donation of thirty two thousand coconut plantations to the assemblies of the Carakas at Piṇḍitkāvada, Govardhana, Suvarṇamukha, Śorpāraga and Rāmatīrtha. These numerous philanthropic activities were undertaken for the benefit of the practitioners of the Vaidika Dharma as well as the common people. Uṣavadāta addresses himself as a dharmātmā which led scholars like Senart to conclude that Uṣavadāta had embraced Buddhism before donating the cave and water cistern. However, this claim is completely unfounded as many of the philanthropic works completed by Uṣavadāta had their roots in Hinduism and there is no authentic evidence to prove that he had become a Buddhist. In ancient times, the rulers extended their charitable works to the subjects of all religious affiliations and Uṣavadāta was abiding by this tradition by making gifts to both Hindu and Buddhist establishments.

To add further, the inscription refers to his journey to the Pūṣkara Tīrtha in Rajasthan and bathing there. For this particular reason, it seems more likely that he was a follower of Hinduism though it cannot be conclusively proved. This inscription also records the donation of a field by him for the supply of food to the Buddhist monks of the four quarters who were residing in the vihāra. The field which belonged to the father of a person called Aśvibhuti, who was the son of Vārāhī, was bought by Uṣavadāta for a sum of 4000 kārṣapaṇas.

Bhagvanlal Indraji, a reputed Indologist has tried to identify the localities and rivers mentioned in this inscription. The river Bāraṇasā has been identified with the river Baṇās which flows through Rajasthan and Gujarat and meets the Gulf of Kutch. Ibā has been ascribed to be river Ambikā which originates in the Bānsaḍā hill in Gujarat and meets the Arabian Sea near Valsad. Pāradā, which today is known as the Pār flows near the hamlet of Pārḍi near Daman.  Tāpī is the same as the river Tāpī. The river Damaṇa is associated with the Damaṇagaṅgā. The river Karabeṇā which finds a mention as the river Kalāveṇi could be the river Kāverī which meets the river Ambikā. Dahāṇukā could be the creek near modern Dahāṇu which is to the north of Mumbai.

Prabhāsa is undoubtedly the sacred place in the Kāthiawad region of Gujarat. The greatness of Prabhāsa has been mentioned in many of the Purāṇas. Bharukachchha is modern Bharuch and the Barygaza of the Greek sources. Bharukachchha was one of the major commercial centres through which India carried out trade with the Roman Empire. Daśapura is modern Mandasor. Śorpāraga is modern Sopārā also known as Śurpāraka. Śurpāraka was the capital of the region known as Aparānta which corresponds to the modern North Konkan region which includes the city of Mumbai. Śurpāraka was a flourishing trade and religious centre in the ancient times. Its importance is highlighted by the fact that there is a narrative which in all probability is completely fictional that Buddha visited Śurpāraka to honour the request of his disciple Purṇa who was a resident of Śurpāraka. Fragments of two of Āsokan inscriptions have also been discovered here and there is also an ancient stupa which may have an antiquity that may date back to the Mauryan times. The presence of the Aśokan inscriptions testifies to Sopārā being a part of Aśoka ̍s Empire. Piṇḍitkāvaḍa and Suvarṇamukha have not been identified.

Uṣavadāta informs through the inscription that as per the command of Bhaṭṭāraka i.e. Nahāpāna he proceeded to help the Uttamabhadra Kṣatriyas who had been besieged by the Mālayas. These Mālayas are corroborated with the Mālavas who were a dominant gaṇa in North India. He also adds that just by hearing the sound of his march, the Mālayas fled. The Mālavas were the ancient people with their antiquity going back to the 4th century BCE. They were originally the inhabitants of Punjab but later settled in the Jaipur-Udaipur region of Rajasthan as a consequence of the invasions of foreign tribes.

Uṣavadāta is said to have captured the Mālavas and given their custody to the Uttamabhadras.   Following this victory, he traveled to the Puṣkara Tīrtha and had a bath there. He also donated three thousand cows as well as a village. In all probability, the Uttamabhadras must have had cordial relations with the Kṣaharāta Kṣatrapas and must have sought help from Nahāpāna who was certainly a more powerful ruler than them as well as the Mālavas, the latter being easily overpowered by the Kṣaharātas under the leadership of Uṣavadāta. The Uttamabhadras, in the opinion of B.C. Law were a second rank republic and they had settled in the Punjab region (Law, 1943: 90). Law further postulates that the Uttamabhadras of the historical period could be the successors of the Bhadrakas or Bhadras who are mentioned in the Epics and Purāṇas (Law, 1943: 394).

The gifting of cows on an auspicious occasion seems to have become a common practice followed in Hinduism by the early centuries of the Common Era. In the previous article also we have seen that a number of cows were given in donation by Queen Nāganikā at the time of performing several yajñas. Our scriptures have always held Godāna in high esteem. Moreover, the construction of a tīrtha or a ghāṭ on the river Bāraṇāsa by Uṣavadāta was also considered to be a very pious act. Feeding the Brāhmaṇas was also an important facet of Uṣavadāta’s charitable works.

Our scriptures have always spoken very highly of feeding the Brāhmaṇas, especially on auspicious occasions. We also get a hint of the emergence of the Hindu sites of pilgrimage like Prabhāsa and Puṣkara and the rituals associated with the visits to such holy centres. Thus we know how the concept of pilgrimage was gradually becoming popular in the society. Tīrthas like Prabhāsa and Puṣkara have been glorified extensively in the Purāṇas and their spiritual potencies have been underlined. Another sacred site which finds mention in the inscription is Rāmatīrtha. Bhagvanlal Indraji identified this tīrtha with the Rāmatīrtha in Sopārā. V. V. Mirashi does not accept this attestation as Sopārā and Rāmatīrtha have been separately mentioned. However, more recent scholars on Sopārā seem to agree with the identification of Indraji and not Mirashi. It could be probable that even in the early centuries of the Common Era, Rāmatīrtha must have been a sacred site of considerable significance and perhaps because of this reason Uṣavadāta deemed it essential to mention it independently.

Giving a piece of land or even a village as a gift had come to be regarded as one of the highest acts of charity. By the early centuries of the Common Era, it was becoming commonplace to donate land. The inscriptions from the Buddhist caves near Junnar record many land donations (Gokhale, 2019).  The Kṣaharāta Kṣatrapas and the Sātavāhanas both made land donations to the Buddhist monks at the monastery on the Triraśmi Hill near Nasik. A noteworthy point is that land was not donated arbitrarily by the royal authorities. As testified by the inscription under study, Uṣavadāta first purchased the field which he intended donating from the owner and only after the purchase did he donate it to the Buddhist monks. Kārṣapaṇas were the currency used in the Sātavāhana and Kṣatrapa times since the 1st century BCE and continued to be so. Uṣavadāta had to pay a large amount of money to Aśvibhuti in exchange of the field. This also proves the abundant availability of coins to pay such heavy amounts in cash.

The inscription under study thus gives valuable insight into the social, economic, religious and political conditions of India, especially western India in the early centuries of the Common Era. One of its major highlights is the vast geographical data that it presents before us. Many of the religious traditions mentioned in the inscription became the fundamental tenets of Paurāṇic Hinduism which was gaining ground in the society.

Mirashi V. V. The History and Inscriptions of the Satavahanas and Western Kshatrapas. Bombay: Maharashtra State Board for Literature and Culture, 1981. 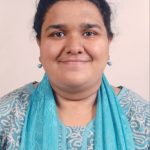 Sneha Nagarkar is currently working as an Assistant Professor of Archaeology at the Centre for Extra-Mural Studies, University of Mumbai. Her fields of specialization areRead more