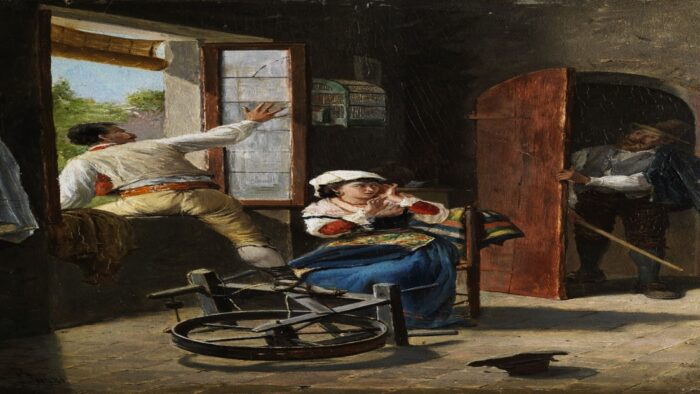 In Indian civilization, female in each varna is responsible for producing pure lineage. Such a lineage is responsible to carry on the traditions of their respective varna in society. This way, society’s dharmic fabric remains unharmed as prescribed in various texts of Dharmashastra.

Producing pure lineage is a responsibility and so Dharmashastra is very particular about the same. Authors of various Smriti texts (Dharmashastra) were aware that even a little deviation in the same, in general circumstances, can lead to a bigger social catastrophe in the future and make a way for a degraded society. A degraded society means a weak nation which can never sustain its ideal form.

Female adultery is something which can damage civilization and can lead the nation into a perishable state. Adultery not only breaks the social structure but also disturbs the established varna system and creates mixed progenies. Woman creates new karmic bonds which delay the journey of herself and many others in the dharmic cycle.

Under the wide umbrella of Dharmashastra literature, with respect to authority, Smriti literature is generally placed after Shruti (Four Veda and associated literature) and Dharmasutra literature. [1] Everything which is not part of Shruti are in the corpus of Smriti.

Apart from Smriti literature, this long list includes – Itihasa (Mahabharata and Ramayana), all texts related to four Purushartha of human life (Dharma-Artha-Kama-Moksha), and all Pauranik literature. That is why Smriti literature is often called Dharmashastra itself. [2]

Smriti literally means “That which is remembered” [3]… Remembered by Proponents of Dharma across various time cycles. These proponents received knowledge from their Guru after going through rigorous sadhana.

The same knowledge was further passed on to generations of eligible holders in the same way. After many years, this knowledge becomes the reference for society, individuals, kings, judiciary, and for everybody for almost everything. So while Shruti texts are Apaurusheya, Smriti texts are considered Paurusheya (Result of human efforts and wisdom over generations of tradition).

Subjects which are narrated in Dharmasutra texts, in a concise form, are generally explained in Smriti texts at length. Smriti has its own content too. There are some noteworthy points to understand this big corpus of literature and its composition –

3. Every Smriti text has an individual tradition of its own composer(s). Ex. Manusmriti was composed by Manu. Same way, all other Smriti texts are to be understood.

4. Shruti literature is fixed in nature and standing on the pillars of eternal truth while Smriti texts are for guiding the civilization, society and individuals so, they adapt to changes with time but never deviate from their root – Dharma and Veda.

Importance of Smriti is understood in the below verse –

It says – Shruti and Smriti are two eyes of a wise person. One is considered one-eyed if he knows only one of them (Either Shruti or Smruti). But the one, who doesn’t know both of them, is certainly blind (in understanding Dharma).

Regarding the importance of Smritis in various time cycles, first comes Manu. Then comes Gautam, Shankh and finally Parashara in satyuga, tretayuga, dvaparayuga, and kaliyuga respectively. [5]

Parashara Smriti And Its Antiquity

As per the reference given in Parashara Smriti [6], this Smriti is related to kaliuga. The very first chapter depicts how Parashara Smriti comes into existence. It is like – Few Rishis asks Vyasa to narrate the wisdom which is useful for kaliyuga.

Vyasa takes them to his father, Parashara, and requests him to provide his wisdom to these Rishis. Parashara agrees and starts narrating. He confirms Manu as the foremost authority among all Smriti texts who first receives the wisdom directly from Brahma. [7]

He also clarifies that every yuga has its own Dharma. He explains this statement with the help of few examples and starts the narration which is known as Parashara Smriti.

Parashara is an ancient name. It first appears in Taittiriya-Aaranyakam and Bruhadaranyakam. Yajnavalkya has considered Parashar among prime Dharmacharya.

Garud-Purana has taken some 39 verses from Parashar Smriti in a concise form. [8] Parashar has mentioned 19 earlier Smriti composers [9] while Kautilya, in his Arthashastra, has discussed views of Parashar six times.

Parashara Smriti, available as of today to us, has two main parts – aachara and prayashchitta. In chapter 10, Parashar has discussed various types of the relationship of a woman – Forceful or wishful, subsequent positions and judgments for such women. At the same time, he has also provided the purification (prayashchitta) process.

Very first, Parashara deals with the woman who has been raped. He provides ways to handle such women –

• Woman, who has been forcefully raped/gang-raped by means of beating, fear, etc. can be made pure by doing Saantapana Vrata. [10]

• Woman raped once, can become pure by observing the natural menstruation cycle and by doing Praajapatya Vrata. [11]

Parashara has given the meaning of Saantapana vrata – To have gaumutra on the first day, gomaya on the second, Milk on the third, Curd on the fourth, ghee on the fifth, the water of Kusha grass on sixth, and upavasa on the seventh day. [12]

Although this is not adultery by a woman but an unfortunate event, the purification process is still required to keep her out from the future implications and complexities.

Under this topic, Parashara is dealing with various complex scenarios which are very common in modern society in the name of modern/forward-thinking. Some scenarios are –

• Upon becoming pregnant by her lover, three types of woman – Divorced, Widow, and whose husband is away from her – should be driven out from society. [13]

• If a woman runs away with his lover with her own wish and lust, in spite of having a husband, children, and other family members at home, then such a woman is considered as ‘destroyed’ not only on earth but also in other realms. [14]

So, adultery by a woman is considered the biggest sin, and such a woman has no point of return unlike in the case of establishing a forceful relationship with a woman (Rape).

• If a woman indulges in drinking then she is considered a fallen woman and there is no way out even for her husband to purify her. Such a woman gets the place in Naraka. [15]

• After the death of husband, left by husband and in case of absence of husband – if a woman creates progeny by her lover then such a woman is a sinner, degraded and fallen from her ideal position in family and society. King is advised to outcast such a woman from the kingdom. [16]

• If a woman, upon beating and other reasons, leave her house and doesn’t return within ten days then she is considered fallen and has no right to be accepted by her family.

She is only accepted back in the fold if she return before ten days and that to without spending time with any other man. [17] For such a case, husband and other family members are expected to do purification and Upavasa. Parashara has given detail of the same.

Specifically, if a woman is Brahman,

• She is considered fallen if she runs away with any other person who is not her husband. She is not allowed to be recalled in the family at any cost. [18]

• If she returns back immediately and even after giving a warning, still enjoys the company of another man, she should be outcasted by both – Her husband and her paternal family. [19]

Parashara has given reason to support it by saying that wherever such a fallen Brahman woman goes, that house becomes impure and becomes a victim of social destruction. [20]

There is a long list of purification steps mentioned by Parashara as a solution to this case. Since such a woman degrades the entire linage so purification is vital to stop carrying the same degraded DNA further. Following prime steps are mentioned –

• Upavasa, Vrata, daana, following rituals, doing japa, participating in yajna can lead to purification for a Brahman. Parashara quotes one statement to support this solution – Five natural elements (Air, Water, Fire, Sky, Earth), kusha grass and chamasa of yajna remains pure forever. These elements only can lead to the purification of a degraded Brahman woman. [21]

• Parashar has mentioned to sprinkle panchagavya in the house, on utensils and clothes, etc. to remove the influence of such a sin done by this woman. Moreover, Daana and food to be given to other Brahman to re-establish the Brahman Dharma in the lineage. [22]

Keeping wishful relation with a chandala (Lower than shudra in the society and primarily looking after dead body management) attracts severe criticism from almost all sections of the society. The purification process is also very tough for the same. [23] Such a woman has to –

• Accept her fault in front of ten learned Brahman
• Stand in a deep neck mud/cow dung for a day and night without taking food
• Shave the head on the second day
• Afterwards, three days of upavasa
• Afterwards, stand in a waterbody for a night
• Drink this water along with a root/flower/fruit/leaf of shankhapushpi, gold, and panchagavya on the seventh day
• Repeat this process until her menstruation cycle

Till this process going on, she is not allowed to enter into her house irrespective of season, health, time or any other reason. This prayashcitta ends with a brahmabhoja and two cows as dakshina.

Adultery by a married woman is considered a sin in kaliyuga by Parashara. Wishful adultery is understood to be a sin but Parashara has considered adultery by a woman in case of the absence of a husband (Physical absence or a death) also a sin. This is in line with keeping the family line pure and to stop further degradation. This also helps women to stop making new karmic bonds and thus make their life simple.

Enjoying illicit sex with another person out of lust is called यौन सम्बन्ध while the legal sex relations rooted in Dharma, with husband, is called काम सम्बन्ध. Parashara has considered this basic distinction while formulating the judgment.

Drinking has been considered a sin by Parashara even if it looks not so severe in terms of other sins. Drinking is in vogue by certain sections of women in society today. It is observed that over the period of time, drinking leads to the destabilization of the social structure of the entire family.

Rape is always an undesired thing to occur with any woman. It is not only painful but also a blot on the social fabric. We can see the compassion and empathy shown by Parashara in such cases. But at the same time, some harsh penalties for a woman (being outcasted) upon conceiving a child due to illicit relationship(s) are also there which depicts two different sides of Parashara.

Keeping wishful relation with a chandala may not be frequent but it might be a reference point for purification processes to be carried out in case of inter-varna relationship.

Here, we can see a mixture of both – harsh penalty and purification process. All these are applicable only when the woman is without a child. If she has given birth to a child out of this relation, then straight away she is outcasted.

Parashara is very strict on Brahman woman’s sin and adultery. Since she has to produce Brahman who guides the society and nation, her purity is very essential. If she becomes impure, very soon society also becomes impure and chaos can gulp the entire civilization.