Why Kalari Faces Hurdles in its Popularization 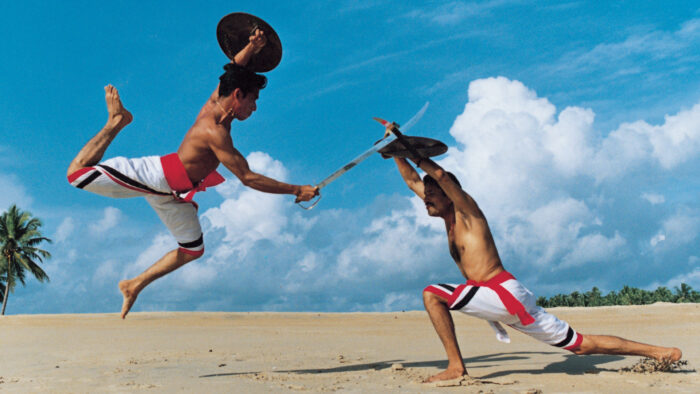 Kalaripayattu[1] is a martial art that has its origins in the legends surrounding Parashurama, the sixth of  Bhagwan Vishnu’s Avatara and the creator of Kerala who is believed to have originally taught the martial art form to the residents of Kerala and established 108 Kalaris (centres where Kalari is taught).The martial art is more popular in Northern Kerala (Malabar) which also hosted the legendary accounts of such Kalari practitioners as Tachholi Othenan, Unniarcha, Chandu and so on in the Vadakkan Pattukal (Northern Ballads), though a separate Southern tradition originating from Agastya Muni (Sage Agastya) is also present.

Kalaris formed the backbone of martial training in Kerala, with them playing a crucial role in training and supplying warriors that littered the landscape in the pre-British era. However after the defeat of Pazhassi Kerala Varma, a regional king who wished to defy the British in the early half of the 19th century, Kalaris were banned, resulting in the near complete annihilation of the art.

However the martial art was revived in the first half of the Twentieth Century by Chambadan Veedu Narayanan Nair, popularly known as CVN, who organized public performances of Kalari in Thalassery and also standardized many of the practices into a standard format. The contributions of Chirakkal T. Sreedharan Nair Gurukkal[2] who wrote the first book about Kalaripayattu also resulted in the rapid revival of the art. Many of CVN’s disciples continue their Kalaris as “CVN Kalaris” to this day.

While Kalari has experienced significant growth and its popularity in Kerala is undeniable, it does not even have close to half the popularity of  Karate, Taekwondo, Judo or even Aikido (of Rahul Gandhi fame). While Kalari practitioners have developed a significant domestic economy in Kerala, there are some issues that prevent the art form from becoming truly global as well.

The lack of standardization

Kalari’s origins means that standardized forms for the system of education in the martial art and the style, format and speed of progression in many cases depends on the Gurukkal of the Kalari rather than a standard code. This offers its advantages in individualized training and specific focus on strengthening the basics of the student but also means that the ability to easily and simply scale training is not present.

Similarly, the lack of standard curricula and certification for trainers in a Kalari means that the individual reputation of the Gurukkal and his Kalari matter, with many trainers being advanced or regular students of the Gurukkal than played employees. Though the CVN system evolved by C.V. Naraynan has the more interoperable system, there remains significant differences between the Thekkan (Southern) and the Vadakkan (Northern) styles, as well as differences among the regions, with the Vadakkan styles also hosting Chavakkadan, Kadathanadan and other styles.  The variations are not only in the oral instructions but also in the actions involved.

Kalari’s traditional system of education is also imparted in a floor made of mud and clay. This does offer a hindrance in replication, as well as in attractiveness for many not accustomed to the same in urban areas. While there are some who practice Kalari in the hardwood gymnasium floors or on those lined with soft tumbling mats, the ability to do the first set of exercises using the feet will be hampered, as well as the risk of hurting oneself considering the movements involved, which involve vertical and horizontal twists and turns. The use of the Gada (mace) is also dependent mainly on the Kalari floor being hard. The grip and strength of feet also improve in the traditional flooring, an advantage not present elsewhere.

A performance of Valum Parichayum (Sword and Shield), performed while wearing the white with red and black bordered Kaccha.

The traditional method of education requires Kalari students to start at around the age of 6-7. The techniques require a significant amount of body flexibility that is hard to acquire in your adulthood which is a minor hindrance. Even in the case of attire during practice, there are variations among even CVN Kalaris themselves, with the formalistic “Kaccha” only worn during performances.

Comparing Kalari and Karate: lessons to be learnt?

Karate, which is set to debut as an Olympic Sport this year in 2021, was standardized in the 1920s -30s in Japan. The efforts were led by Gichin Funakoshi who is known as the father of Modern Karate, whose disciples founded the Japanese Karate Association (JKA) the oldest and most influential Karate organization in the world. The standardization of the system which included uniforms and the famous coloured belt ranking system. The establishment of Karate clubs in Japanese Universities combined with the promotion of the marital form in films in the post-World War-II era led to a ballooning of interest in the martial art in the western world.

Kalari’s biggest hurdle has been the inability to standardize and scale, as stated earlier. The closest form of Kalari that comes to standardization is the CVN style, but the issues surrounding training continue. An active effort on the part of associations to bring about the sort of popularity that Karate has enjoyed is lacking. This has to do with the questions surrounding the redactions and the reforms in the art form itself, teaching style, site, and method that would need to be undertaken.

The traditional teaching of Kalari involves the worship of the Poothara, Ganapatitara  and the Guruthara. The reverence to the Gurukkal and to one’s instructors is integral to Kalari as well. Some centers and studios outside Kerala or in catering to other audiences, especially foreigners have diluted these norms.

Kalari, as it exists today, is a self-sustaining system of martial education not under significant threat of extinction or destruction. Yet the structural barriers to its popular evolution would involve the dilution of that which made Kalari the martial art that it is today as well. A functionalist argument to create a brand of Kalari for popular export while maintaining the traditional forms and variations exist, while a purist argument in limiting such changes considering the indesirious effects it would have on traditional principles that ground the art.

While the Kerala Government has recently decided to create a Kalari academy as part of Kerala Tourism’s craft village in Thiruvananthapuram led by the esteemed Padmasree Meenakshiamma, an exponent of the Kadathanadan Style, it seems geared towards tourism promotion and improving its visibility in a small scale.

Kalari can also not be reduced to a martial art, with its treatment and healing systems as well as the diet and ethics forming a strong part of it as well. These components of Kalari cannot be ignored either in promoting the martial art.

Greater viability and support for Kalari would be desirable, but deciding upon the martial art’s form and structure may be best left to its traditional Gurukkals, whose involvement traces to an ancient lineage trained by Parashurama himself.

[1] Kalari refers to the martial art and the centres where it is taught. The word “payattu” refers to fighting or the form of fighting or practice, loosely translated. Kalari

[2] A title for those who have attested Guru sthanam by completing Kalari Training.

Ananth Krishna Subhalakhsmy is a lawyer and has been trained in Kalari for over a decade under the tutelage of the Late Sri. Chandran GurukkalRead more