Discussions on Trade and Economics in Mahabharata 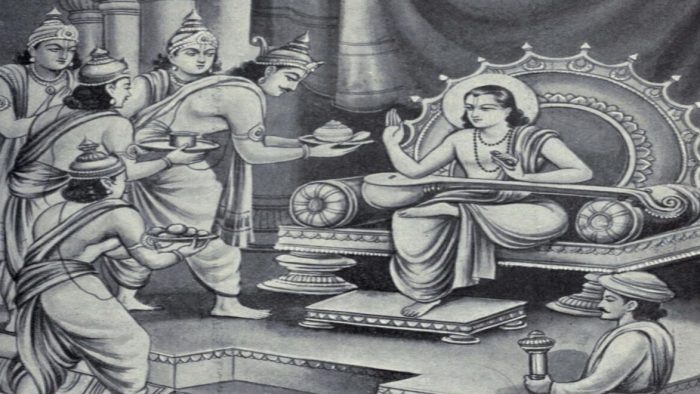 The Epic Mahabharat deals with concepts that are relevant to the modern erahence, it is perennially fresh and contextual. We connect easily with such literature and think, feel, and discuss with utmost seriousness.

We identify ourselves with the characters and situations and get into heated arguments as if we are the characters involved. Vedavyasa’s Fifth Veda never gets outdated. It is as fresh as the morning sun rays or the first drops of the rainy season.

Interestingly not only the gripping storyline but also various topics explored in the Epic make it an experience to cherish. Economics embedded in this epic enlightens and amazes us to a great extent.

The great Vedavyasa explored this aspect also in his war-ridden epic rather thoroughly through discussions among the central characters. A number of incidents in the epic discuss economy and trade.

Through these discussions, we know about the way economy and trade was handled in those days, and how the other wings of the administrative system functioned. We get an understanding that enables us to assess the facts.

A look into the facts

Narada in Sabha Parva discusses topics related to economy when he visits Pandavas at Indraprastha in Sabhaparva.

Vaisampayana continued, “The great ascetic Narada, having answered Yudhishthira thus, again asked the just ruler, ‘Do the officers of thy government, O king, that are paid from the taxes levied on the community, take only their just dues, from the merchants that come to thy territories from distant lands impelled by the desire of gain?

Are the merchants, O king, treated with consideration in thy capital and kingdom, capable of bringing their goods thither without being deceived by the false pretexts of (both by the buyers and the officers of government)? (2.5.6)

In fact through Narada’s questioning of Yudhisthira, and his own elaborations on these topics Vedayavsa presents the ideal economic system, trade, defense, agriculture, and other important features of state administration at that time.

Narada asks the king whether or not his expenditures are about 1/4th, 1/3rd, or at worst 1⁄2 of his income, and whether his accountants apprise him of his income and expenditure every forenoon. He wonders if wage payments to artisans are not delayed by more than 4 months and that there are no arrears to payment to the soldiers as well. He expects that the king must applaud and reward good work done by the artisans.

Narada mentions that there are four commercial activities (vaarta), namely, agriculture, trade and commerce, animal husbandry, and lending at interest, that lead to the economic welfare of the people. He questions whether the king ensures that these activities are carried out by honest men. He asks whether or not the king helps farmers by extending loans for seedlings at a rate not exceeding 1/4th of the produce.

Narada also hopes that since officers are paid for by the taxes collected from the citizens, they must treat merchants coming from faraway places fairly and collect only the just dues from them.

Narada even touches upon the issue of pay hike, indicating that there used to be a pay hike depending upon one’s performance. He questions Yudhishtir whether his servants, who have special ability to accomplish a particular business, get disappointed because of not getting any pay hike!

Narada hopes that the king is rewarding the people with gifts of wealth proportionate to their qualifications. Thus, Narada alerts Yudhiṣṭhira about his important role in market facilitation.

Some more questions posed by Narada to the king

Are you knowledgeable about profit yielding ventures?

Are you in close contact with agriculturists of your country?

Are you having employees who have the practical experience and at the same time incorruptible?

Are you surveying your own strength and that of your rivals in-country, forts, cars, elephants, cavalry, foot-soldiers, the principal officials of the state, food supply, computations of the army and income, the religious treatises in force, the accounts of state, the revenue, wine-shops, and other things?

All these questions together form a theory of the ideal economy that should be followed to provide good governance. An extensive and elaborate one-sided speech of Narada hence helps us know much about economics, finance, and trade in the Mahabharata times.

In Shanti Parva (Chapter 68) Bhishma speaks on this subject. He says that a king should take one-sixth of the income of his subjects as a tribute for meeting the expenses of protecting them. He should also forcibly take away the wealth, much or little (as the case may require), from the ten kinds of offenders mentioned in the scriptures, for the protection of his subjects.

Bhishma also notes the importance of and dependence on trade and agriculture. He ascertains the role of Vaishyas in assisting the king, by upholding the safest measures of economy-based trade.

The ruler should enlighten the Vaishyas of his plans of building a wall round the city, spending money for defence purposes, keeping a share to be spent on the public welfare system and other essential things to be attended upon.

Then he should collect the required taxes from them. He should not burden them by imposing heavy taxes which makes them desert their own country. Suitable protection should be given to them and their businesses.

Required arrangements should be made regularly to ensure that their businesses run steadily. At frequent intervals, they should be given awards/gifts, and thus their trust must be won.

Appropriate rewards should always be given to the traders and merchants for their efforts. Because, Vaishyas develop and improve the nation’s agriculture, cattle-rearing, and trade.

On the whole, King should work in harmony with the merchant class to make his country wealthy and prosperous with the right kind of economic infrastructure.

Arjun explains the importance of wealth

Arjun was not only the best warrior of his times but also was an expert in Arthashastra. His views on wealth (finance), trade, and punishment are interesting and thought-provoking.

Vaisampayana continued, “After Vidura had finished what he had to say, Pritha’s son Arjuna, well skilled in the science of profit, and conversant also with the truths of both Virtue and Profit, urged on (by the drift of Yudhishthira’s question), said these words.”

Arjuna said, “This world, O king, in the field of action. Action, therefore, is applauded here. Agriculture, trade, the keeping of cattle, and diverse kinds of arts constitute what is called Profit. Profit, again, is the end of all such acts. Without Profit or Wealth, both Virtue and (the objects of) Desire cannot be won.

This is the declaration of the Sruti. Even persons of uncleansed souls, if possessed of diverse kinds of Wealth, are able to perform the highest acts of Virtue and gratify desires that are apparently difficult of being gratified.

Virtue and Desire are the limbs of Wealth as the Sruti declares. With the acquisition of Wealth, both Virtue and the objects of Desire may be won. (12.161)

Arjuna elaborates on the need to acquire wealth and his words stand true generations later, even today. He says:

He that has wealth is regarded as a learned man. If a person who has no wealth desires to achieve a particular purpose, he meets with failure.

Wealth brings about accessions of wealth, like elephants capturing (wild) elephants. Religious acts, pleasures, joy, courage, wrath, learning, and a sense of dignity, all these proceed from wealth,

From wealth, one acquires family honor.’

Bhishma also substantiated the same thought in his conversation with Yudhishtira that the path of policy is consistent with the aggregate of the three (viz., Virtue, Profit, and Pleasure). Guided by this Sruti, any King can win prosperity by protecting people. (12.138)

There is much more in Mahabharatathat brings forth discussions about the economy of the day and the functioning of trade. That was why ‘Whatever we see here, we see elsewhere. Whatever we cannot see here, we won’t see anywhere else.’