The Chinmaya International Foundation (CIF), based in the lush green serene pious environs of Veliyanad, organized an Advaita Immersive Camp during the last week of December 2019. This is a report of the same attended by this author aided by the generous travel grant awarded by Indic Academy.

On 22nd December 2019, I was fully prepared to travel and attend an Advaita Immersive Camp in some distant village in Kerala. Having spent most of my life in an urban setting, I was looking forward to spending some quality time amidst the greenery and listening to some good lectures by Swami Advayananda ji on a section of ādiśaṃkarācārya's bhāṣya to the brahmasūtra-s of mahaṛṣi vedavyāsa.

As this was supposed to be a camp focused only on the second sūtra in the brahmasūtras, I was a little apprehensive while applying for the programme. However, the online test that decided the rightful adhikārin of the lessons to be learnt pacified my doubts as all the questions were based on the fundamentals of tattvabodha by ādiśaṃkarācārya and vedāntasāra by sadānanda. A little less than six hours before my train was scheduled to leave for Tripunithura from Chennai I received an ominous Email from the Director of CIF saying –

“Due to aggregation of his chronic back pain, Swami Advayanandaji is not able to take the sessions during this Advaita Vedanta Immersive 2019. We regret the unforeseen inconvenience caused and pray for Swamiji's speedy recovery.”

It would be a gross understatement if I were to describe what I felt as merely devastation. I had already become blank and did not know what to do. This was technically the first time I was to study in person anything from any sannyāsin; and at the very first such attempt it seemed like the universe wished not to support my endeavour. But all was not lost. The remaining part of the mail from the Director of CIF showed me a sliver of hope – 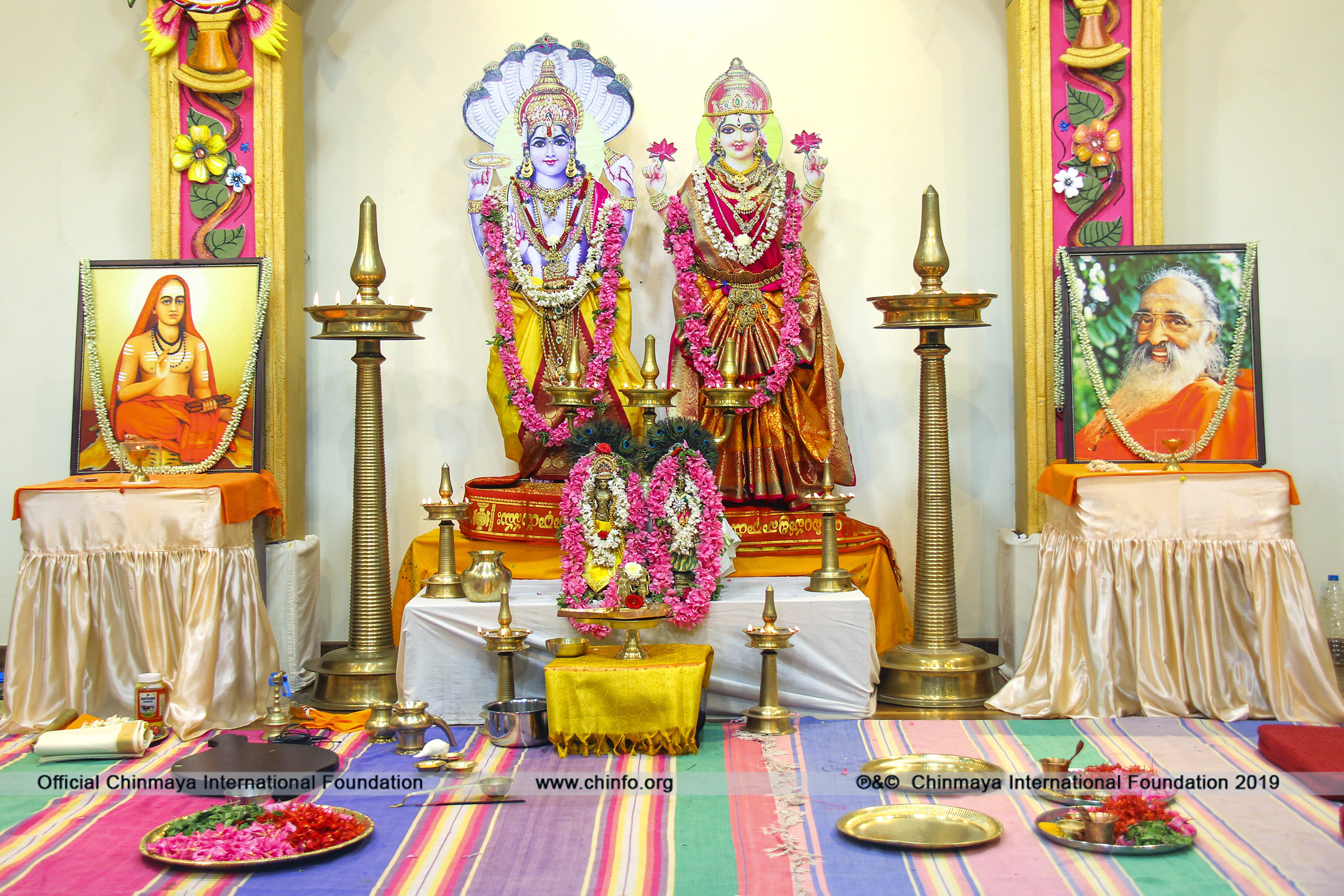 “We are happy to inform you that Swami Sharadanandajii has kindly agreed to take Mandukya Upanisad for Advaita Vedanta Immersive 2019. This is a true gem among the Upanishads. Swami Sharadanandaji has assisted Pujya Guruji Swami Tejomayanandaji & Swami Advayanandaji during the Sandeepany Vedanta Courses at Mumbai. Swamiji is presently the Acharya of the Sandeepany Kerala Vedanta Course in Malayalam being conducted at CIF.”

As I didn’t know the name of any sannyāsin other than Pujyagurudev Swami Chinmayananda ji himself and Swami Mitrananda ji from the Chinmaya Mission, I didn’t know what to expect from the camp. Nevertheless, I took my chance and decided to take the leap of śraddhā to see what the Universe had decided to teach me during the end of 2019.

I reached Veliyanad two days prior to the dates of the camp. Those two days gave me much respite from the usual somewhat rapid city-life I was leading in Chennai. The fresh cool breeze, the bright welcoming sunlight, the friendly foliage, the melodious birds, hospitable comfortable dwellings, tasty healthy food, and the peaceful silence that the CIF campus offered were remarkable. Even the volunteers and workers on site were eager on being friendly. But what astounded me about the campus was not any of the aforementioned.

The fascinating historically and culturally significant structure around which the CIF campus is developed is a  śikhāmaṇi of bhārata – the Melpazhur Mana, fittingly renamed by Pujya Gurudev Swami Chinmayananda as Adi Sankara Nilayam. This ancient Nambudri Family home, a splendid exemplar of old Kerala style of architecture, is believed to have been the place where ādiśaṃkarācārya, then śaṃkara, was born to aryāmbā (as it is her ancestral home) and was also given the brahmopadeśa during his upanayanasaṃskāra. Just about fifty kilometers away is Kalady, the paternal native village of śaṃkara. It is believed that aryāmbā took śaṃkara to Kalady after śivaguru, śaṃkara-‘s father, attained śivaloka. 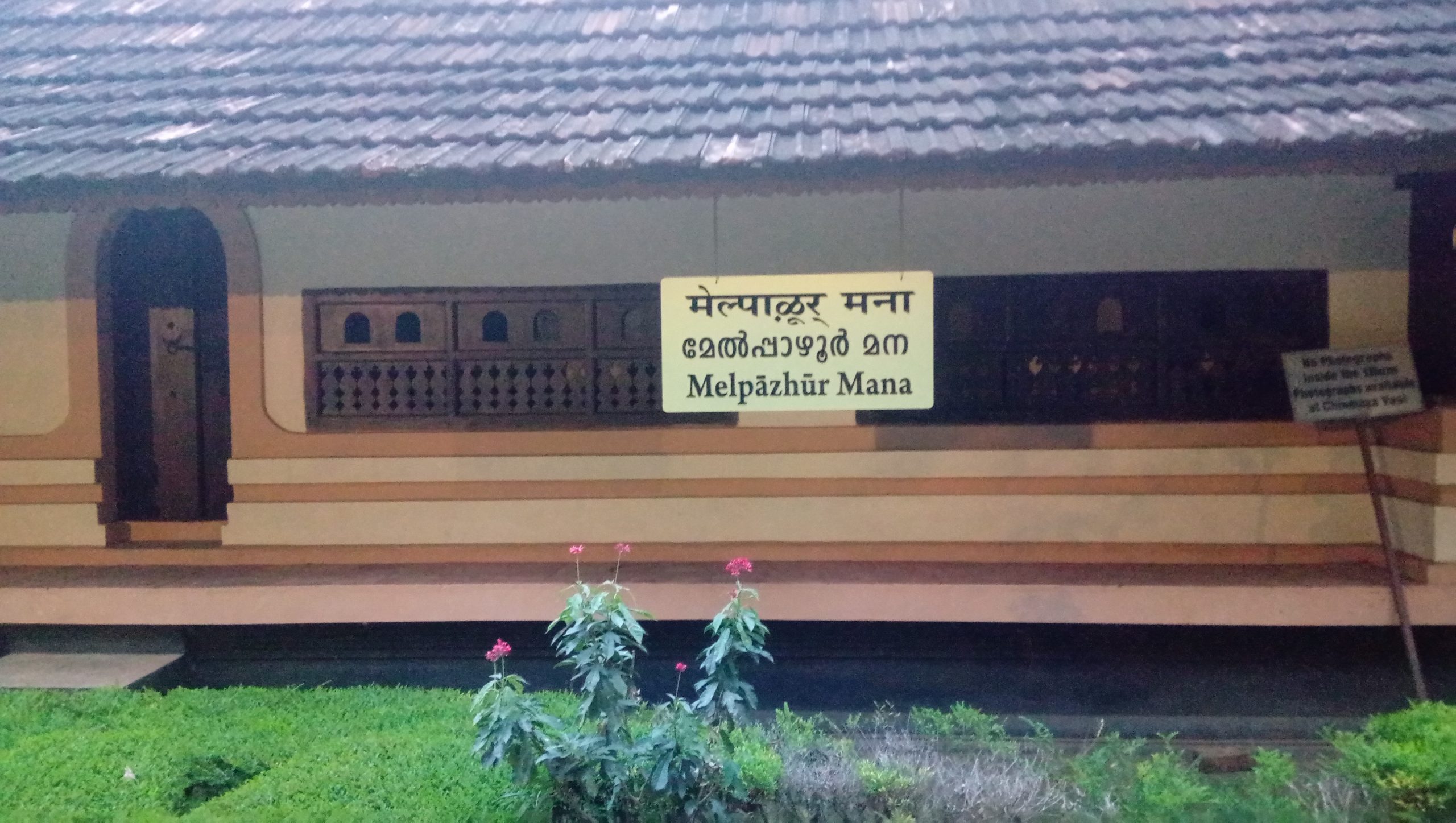 Amongst the rooms inside the Melpazhur Mana is a room where śaṃkara is said to have blessed this loka with his mortal entry. This room is now a dedicated space for showing our maryādā and bhakti to ādiśaṃkarācārya. Everyday there are brahmacārin-s who after their morning sandhyāvandana perform a brief pūjā to ādiśaṃkarācārya in the form of chanting a nāmāvali and gurustotra followed by karpūranīrājana and puṣpāñjali. Every single visitor is sure to have an outwardly experience on mere stepping into this room. What else is left to say if one were to meditate here? Definitely samādhi and brahmajñāna if done with śraddhā.

Right after the inauguration of the camp on the 25th of December, we were addressed by Swami Sharadananda ji (henceforth referred to as Swamiji unless otherwise) welcoming the participants and elaborating on the anubandhacatuṣṭaya of the camp, i.e. adhikarin (qualified receiver of the jñāna), viṣaya (the actual summary of the content we were to be blessed with), sambandha (relationship between the other three), and prayojana (the utility of the jñāna to be blessed with). Swamiji was to be ably assisted by two bright brahmacārin-s and two bright brahmacāriṇi-s. Each of the four aforementioned were in the process of living their lives as reflected in vedānta and were qualified to teach on their own. The participants were divided into four different groups each facilitated by either a brahmacārin or brahmacāriṇi. Further, the schedule and design of the activities in the camp were based on śruti-pramāṇa and sampradāya. 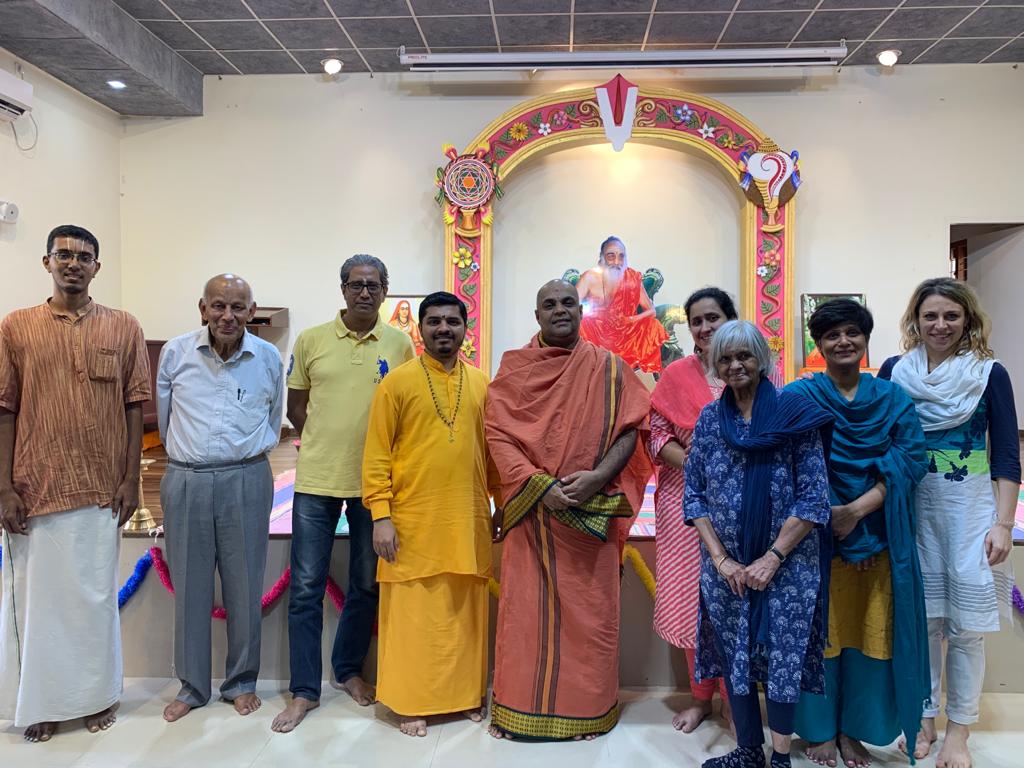 “The ātmā, O maitreyī, is realized (literally seen) by being (first) heard of (from the guru and the śāstra-s), (then) reflected upon, (and) (lastly) meditated upon. In the ātmā, verily on realization (having seen), having heard, having reflected upon, all this (that exists) (becomes) known (or understood) (completely).”

So also did ādiśaṃkarācārya instruct the adhikārin of vedānta to engage in śravaṇa (careful studious listening), manana (continuous reflection of what is heard), and nididhyasana (meditating on the wisdom gained) in order to attain advaitasiddhi, i.e. brahmasākṣātkāra.

There is one interesting subhāṣita which says–

“The śiṣya obtains a quarter (of the wisdom) from the ācārya, (another) quarter by his own intellect (and understanding), a quarter by (discussing) with fellow śiṣya-s, and (a final) quarter with (the passage of) time (i.e. experience).”

This camp had incorporated these components in the schedule as–

- carvaṇa – in the form of solitary reflection

- nididhyasana – guided meditation by Swamiji in the early mornings

- manana – in the form of group discussion with fellow campers

- svādhyāya – in the form of self-study

- niścaya – in the form of summarization

- spaṣṭīkaraṇa – in the form of doubt clarification by the assigned facilitator

The spaṣṭīkaraṇa sessions were the most enlightening after the śravaṇa sessions because of the able guidance of the facilitators. Their long experience and sādhana proved extremely helpful to the campers. 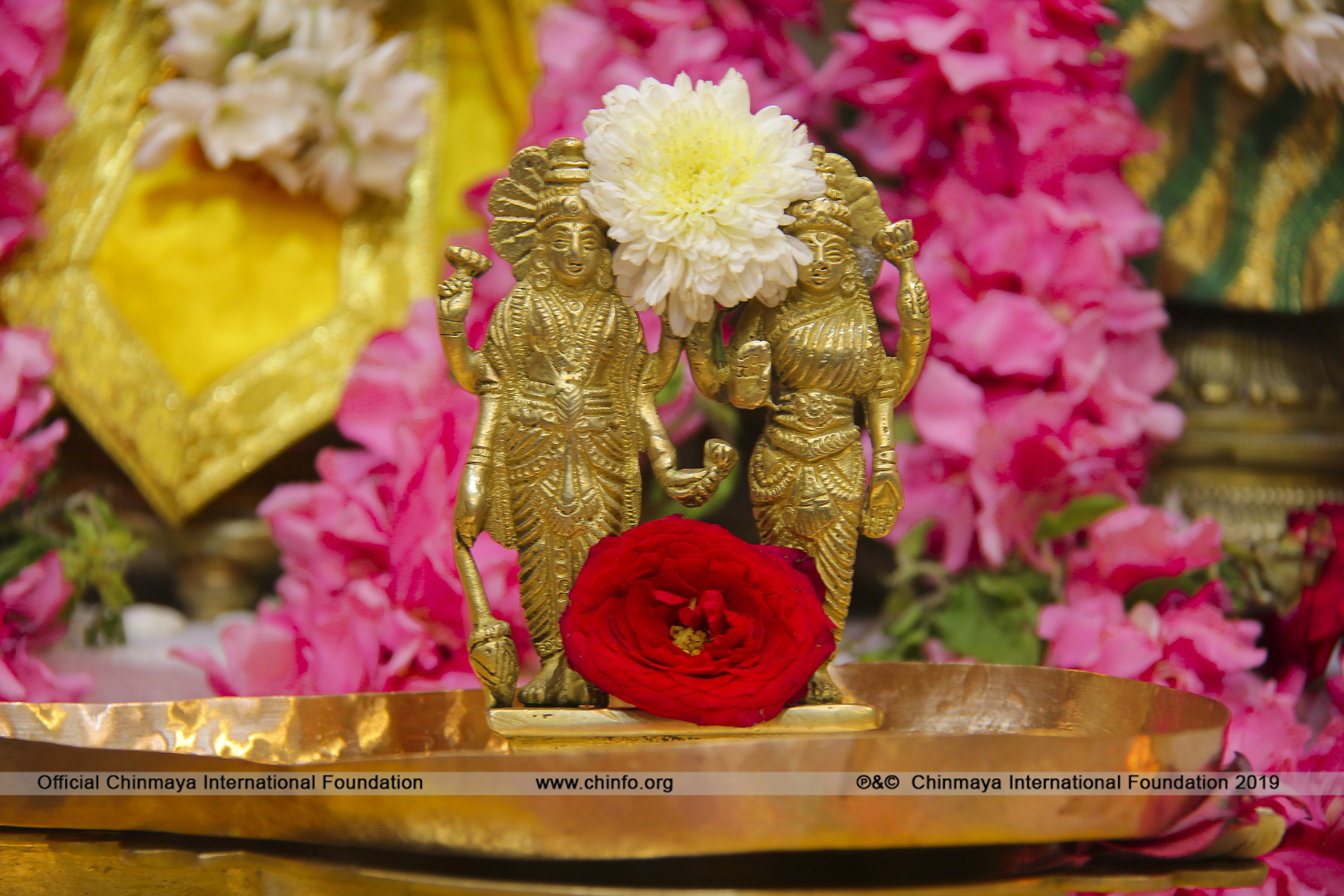 Several interesting events and personal observations have highlighted my camp experience. Here are a few -

1. On the first day of the camp, Swamiji stressed on the fact that the camp was not merely a course or educational programme meant for mere academic scholarship but for the development of understanding of the basic tenets and concepts of advaita and implementing the same in one’s own sādhana. This was unlike any other educational programme I had ever attended. The seriousness and sincerity of his words put my focus in place.

2. The fellow campers, specifically in my group, were all at least twenty or more years older to me (in this janma) and were not qualified in samskṛta. But their approach and depth of grasp of the concepts kept my ego in check. I had understood that there was always somebody better than me in any aspect, that I was to remain humble no matter what I learnt for learning is a never ending process, and also that śraddhā bet rote academic learning in the long run.

3. On 26th December was the sūryagrahaṇa during which we were guided by Swamiji to utilize the time appropriately for our own sādhana/tapas. We were given time to do our own mantrajapa-s but were asked to sit later together during the grahaṇa period and learn to chant the māṇḍūkyopaniṣad as the collective śakti of a satsaṅga far exceeded that of any single individual. This was one of the rare times I had experienced any such collective sādhana. This was also my first time when I personally could sense a difference in the environment at the onset of, during, and close to completion of a sūryagrahaṇa.

4. On 27th December, during the evening satsang time, one of the brahmacāriṇi-s shared with us her thoughts on the importance of satsaṅga as a means to something higher and one that blesses a sādhaka with sādhanacatuṣṭaya as it inspires all those in the satsaṅga to do things due to admiration of fellow advanced sādhaka-s leading to possession of the same qualities that are being admired. The inner seeker is triggered just as when ratnākara on meeting devaṛṣi nārada became mahaṛṣi vālmīki and Mr. Balakrishna Menon on meeting Swami Shivananda ji became Pujya Gurudev Swami Chinmayananda ji. A satsaṅga acts as a reminder to the sādhaka lest (s)he forgets to seek the Truth. The brahmacāriṇi motivated the audience to not give up on the journey to the Ultimate.

The camp officially ended with a gurupādukāpūjā to Pujya Gurudev Swami Chinmayananda and distribution of certificates of participation to the participants of the camp.

While the rest of world spent their time changing their calendars, wishing each other prosperity, watching premiere movies, going on a shopping spree, and gorging on delicious cakes and bakes on New Year’s eve, I (and surely my fellow campers in their own ways) spent the night during my travel remembering the week’s blissful experiences and reflecting on the most important mantra from the Māṇḍūkyopaniṣad –

Abhinav Kadambi has a M.Tech degree in Medical NanoTechnology and is currently pursuing M.A. in Sanskrit from University of Madras. He has interests in SanskritRead more