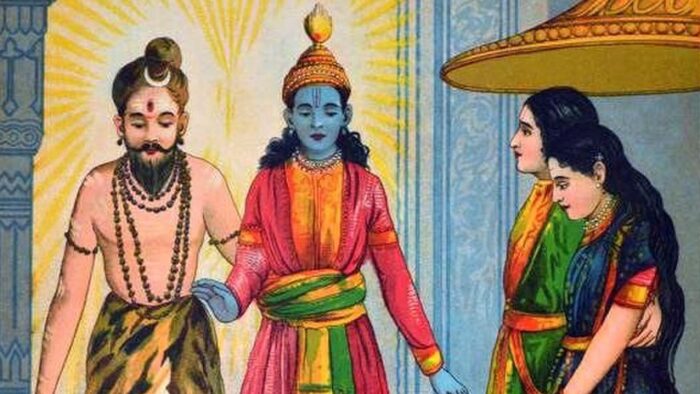 One of the core tenets of Sanātana Dharma is debate on ideologies and philosophies. In day-to-day life, a man finds himself face-to-face with multiple questions with equally complex dimensions. When the debate extends from a mere retrospection to an intellectual debate with another human, it opens up multiple avenues and possibilities for learning, mutual development, and at times, extreme polarisation.

The growth of Sanātana Dharma in Bharatha Varsha has been attributed to multiple factors, one of which includes the various schools of philosophies promulgated by the various philosophers. Bharatha Varsha gave śrī ādi śankara, śrī rāmānujācārya and śrī madhvācārya to the world who looked at various philosophical statements and gave extensive commentaries on various scriptures that have transcended generations through śruti and smr̥ti.

The core tenets of these individual schools of thought were heavily influenced by one of primary Gods who forms the holy trinity i.e. Trimūrti. Specifically, two distinct yet intricately connected schools of thought emerged wherein either Vishnu or Shiva is considered as the main deity of reverence.

Human evolution furthered the caste system which split people on the lines of the philosophical lineage that they were bequeathed with. Over time, the debates transcended from intellectual philosophical debates to actual conflicts between two different sects of people. This conflict is time-immemorial and forms an unspoken inexplicable part of the society.

To a neutral observer, this situation is not short of bewildering, considering the extremes these philosophical differences could lead to. When faced with such challenges, one starts to question the root-cause. What lead to this situation wherein philosophical belief system leads to unacceptance of alternate schools of thought?

Was this ideological difference an integral part of our Purānas or Itihāsas? What was the exact relationship between Vishnu and Shiva in Puranas and were there any instances where they were at loggerheads? This article tries to capture some specific instances where Shiva and Vishnu in his Krishna avatar had some close encounters. These interactions have some interesting answers that we aspire for and provide a much better perspective of the perceived differences or rather the lack of the same.

In Bharat Varsha, Sri Krishna and Shiva are two of the most revered deities across the length and breadth of this great nation. In Purānas, there are a couple of instances where these two divine forms meet each other and every encounter landed up providing invaluable lessons to the creation.

In this essay, we look at two specific episodes where Krishna and Shiva came face to face. The first episode is related to Banasura incident from Shiva Purana and Vishnu Purana. The second part is from Devi Bhagwatha Purana where Sri Krishna performs a penance to please Shiva and requests for a boon.

Banasura is the son of Mahabali & grandson of Prahalad. His daughter Usā was blessed by Parvati that she would see her lover in her dream. When Usā does see Aniruddha (grandson of Krishna) in her dreams, she conveys the same to her friend Citralekha who draws his picture, later kidnaps him and brings him to Sonitapura, i.e., the capital of Bana.

Sage Narada comes to Dvaraka and conveys the news about Aniruddha being held captive in Bana’s palace, wherein Sri Krishna, Pradyumna hurried to Sonitapura along with a huge army.

When Yadava army surrounds Sonitapura, Shiva along with his son Subramanya, devas like Agni and Shiva’s bhootha-ganas come to the battlefield to defend the city. Shiva comes to defend Sonitapura based on a boon given to Banasura earlier as Shiva would have been pleased by the severe penance of Bana.

There was a huge battle between Shiva and Krishna. Both of them used divine astras against each other, cancelling each other’s divine weapons.

During this fierce battle, Krishna commands his charioteer to proceed towards Shiva and on coming face-to-face with the Lord of the worlds, Krishna goes on to praise Shiva in an elaborate manner. This discourse by Sri Krishna is laden with philosophy where he heaps praises on Bhagwan Shiva.

Oh Lord of the Gods, you favour those who seek refuge in you. I bow to you the great lord, the soul of all and of infinite power.

This is one of the most philosophical statements made by the most revered form of Maha Vishnu, wherein he, the supreme omnipresent Lord himself bows down to Shiva. This is clear mark of respect and acknowledgment of Parameshwara which is indicative of the narrative that followed.

Krishna goes on to credit Shiva for his various roles in creation, sustenance and dissolution of the universe. While Krishna extolls the different facets of Shiva, there is one common theme which recurs multiple times.

Sri Krishna keeps attributing Shiva as nirguna as seen below

O Sankara, though you are Nirguna, you appear as if you are laden with best gunas & are self-illuminated. Imbibed by the bright gunas, you are radiating like a lamp & brightening up the creation.

This is yet another interesting anecdote as usually Vishnu is attributed to be Nirguna, yet an avatar, that one of the most prominent ones worships Shiva as a Nirguna form.

Krishna requests Shiva to enable him to cut the arms of Bana who was wreaking havoc on the Yadava army with his strong 1000 arms. Based on Shiva’s recommendation, Krishna employed Jr̥mbhaṇāstr̥ on Shiva which forced the latter to retire from the ongoing battle. Krishna goes on to destroy the army of Banasura using weapons like Sword, Gadha (mace), Arrows etc.

When Bana was all but defeated, another dialogue ensues between Sri Krishna and Shiva. Sri Krishna says:

Oh Shiva, you and me are not different. We are the same i.e. who I am, so are you the same person.

Before leaving Sonitapura, as a final part of his dialogue with Shiva, Sri Krishna foresaw the future and spoke these golden words:

This specific instance is open to multiple interpretations, but clearly an indicator of the fact that Sri Krishna himself is mentioning that though there are no differences between us, humans with ignorant minds and clouded eyes will only find out the differences.

To a seeker, there can’t be a much stronger truth than these prophetic words of Bhagwan Sri Krishna, where he is clearly advocating that Shiva and he are one and the same.

In Krishna avatara, Bhagwan descended in the form of a common man and was susceptible to the influences of Maya, like any other human. Being a divine manifestation (avatara) of the almighty omnipresent Bhagwan, was he immune from the frailties of a common man?

In Śrīmad Dēvibhāgavata Mahāpurānam, there is a very interesting shloka that describes the nature of manava janma

Whether it’s Devatas or Asuras, when they take manava janma, they will imbibe all the guna-doshas of a manava. Their previous Swaroopa of deva or asura lays hidden, may reveal occasionally, but will not be able to come to forefront. It will always lay hidden within the body.

What this is essentially conveying is that all those, including Sri Krishna, will inherit the guna-dosha or in other words, be under the influence of Maya.

If one considers a perspective, Sri Krishna had a very hectic life

After all these incidents, Jambhavathi, who didn’t have a son, expressed her desire to bear a child to Krishna. In order to fulfill her wishes, Sri Krishna travels to the mountain where Upaman’yu r̥ṣi, an ardent devotee of Shiva was meditating.

Under Upaman’yu’s guidance, Krishna starts a severe penance to please Maheshwara. This penance goes on for 6 months, where the severity increases month-on-month. Finally after six months, Shiva gives darshan to Krishna along with his consort, Uma.

Shiva says, I am pleased by your severe penance. Please ask for a boon of your choice.

After having the vision of me, the one who has the ability to fulfill all wishes and desires, there will not be a single wish that will be left unfulfilled.

Sri Krishna proceeds to describe the various glories of Shiva while recounting some of his own experiences, during which, he does mention the desire of Jambhavathi to bear a child.

Shiva responds by mentioning that Krishna will have many children. He would have 16,050 wives with each bearing 10 children each who will be strong and valiant. Interestingly, after saying thus, Shiva becomes silent.

Perhaps the play of Prakriti and Purusha had to be demonstrated to the mere mortals or possibly there was a divine cosmic play in the mind of the omnipresent Bhagwan.

After Shiva becomes silent, Parvati addresses Krishna and prophesizes that he will lead a life of Grihastha with all the trappings of life. After 100 years, due to a curse by a Brahmana and Gandhari, his family will be wiped out.

Parvati goes on to elaborate that Krishna’s children will be drunk with arrogance as an effect of the curse, fight amongst themselves and destroy the family. She also mentions that Krishna will also leave his mortal coil along with his illustrious brother. Hence, she recommends him not to lament about the eventual reality.

Shiva’s blessing to Krishna lead to Guha (Subramanya swamy) being born as Samba to Jambhavathi. This is captured in Srimad Bhagwatham as here

O gentle one, does Sāmba fare well? He exactly resembles the son of the Personality of Godhead. In a previous birth he was born as Kārttikeya in the womb of the wife of Lord Śiva, and now he has been born in the womb of Jāmbhavathī, the most enriched wife of Kṛṣṇa.

History teaches us that Samba became the core reason for the annihilation of Yadava family.

This incident has another significance wherein Sri Krishna learns Shiva Sahasranama Stotra from Upaman’yu, which he later teaches to Yudhishtira as captured in the Anushasana Parva of Mahabharatha.

In numerous instances across different Purānas and Itihāsas, we can find that Maha Vishnu and Parameshwara are contemporaries who complement each other and support each other in various forms. Through the various incidents, the common message that is conveyed to the humankind to assimilate is that there is absolutely no difference between the 2 supreme powers.

Manavas should transcend the barriers of ignorance that identifies differences between them and aspire to reach the state of equanimity where one worships both supreme powers with equal devotion and fervour. 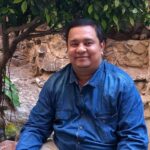 Gee Vee is an engineer by education, has a technical leadership role in a Fortune 500 company, loves reading Puranas, Itihasa as well as fictionRead more