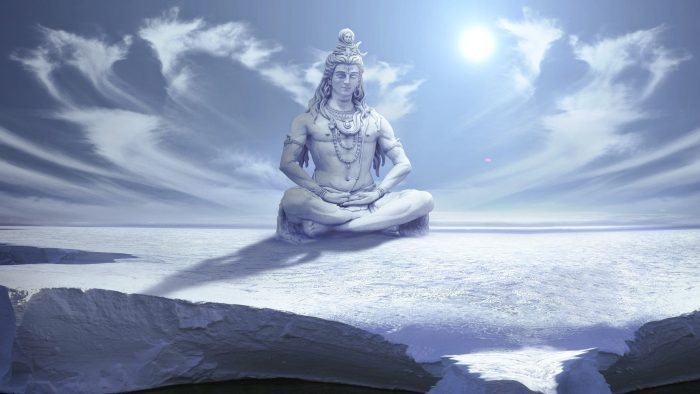 I bow to my ancestral sages, viz. Vashishtha, Kaundinya, and Maitra-Varuna (Agastya) and their respective consorts to bless this child of their lineage with supreme scriptural wisdom. Also, I prostrate before the legendary Kāvyakanṭha Gaṇapati Muni and Bhagawān Ramaṇa Maharṣī.

Finally, I prostrate before my kula-dēvatās viz. Sita and Rama who are the epitome of righteousness, and I bow to my brother Hanuman who happens to be of the same Gothram as that of mine.

By the grace of Lord Shiva and my dearest mother Uma, whatever learnings I received from them, I have tried my best to document them in the form of this article. In this article, within the limits of my capabilities, I have tried to reveal the subtlest secrets behind the cause of creation, and the creation process.

It is pitiable that people commonly think “Kāma” means only “sexual desire”, hence tend to think “Kameshwara” as the “God of love and sex”, but in reality, it is not so. The secret doctrine of Lord Kameshwara and Kameshwari is very esoteric and securely hidden, and I do not behold anyone who can understand their nature in the entirety.

However, in the past, in the present (including me) and in the future, whoever had tried, is trying, and would try; to grasp their nature, which is highly esoteric, cryptic and hidden in scriptures; had understood, is understanding, and would understand; only and only, by the mercy and grace of the divine couple viz. – Lord Kameshwara and Kameshwari! Without their grace (or without the grace of a Guru) it is impossible to understand the matrika-swarupa of Shiva-Shakti even if one reads a billion scriptures; there is no doubt in that! The same is confirmed by Suta Samhita of Skanda Purana as stated below. (Why I emphasized on matrika-swaupa would be clearer in later sections).

“Mātr̥kā-s are pronounced in three forms – in gross form (through vaikhari), in subtle form (through madhyama) and in even (more) subtler form (through pashyanti and para). Mātr̥kā-s should be learned from the upadeśa of a guru, otherwise, it is impossible to understand them even by studying a billion scriptures”.

Therefore, if I have been able to grasp even an iota of the nature of Lord Kameshwara and kameshwari, the credit solely belongs to them alone, who are my very own parents and I am just a seeker of their grace, an infant in their lap, and an instrument in their hands!

Well, in many of my past articles, I had referred to a verse from Rig Veda to cite how Soma (Shiva) and Aditi (Uma) mutually brought forth the universe. That verse is quoted below which says Soma places his seed upon the womb of Aditi and thereby creation occurs.

“ The Soma-stalk hath roared, following with the wave: he swells with sap for man the skin which Gods enjoy. Upon the lap (womb) of Aditi, he lays the germ, by means whereof we gain children and progeny”.

Even Bhagawad Gita states the same phenomenon and states that prakriti is the mother of the universe and Brahman (Purusha) is the seed-giving father who casts his seed into the womb of Prakriti and thereby creation proceeds. The relevant references from Bhagawad Gita have been cited below.

“The mahat-Brahman (prakriti) is my womb; in that, I place the seed; from there, O Bharata is the birth of all beings”.

“Whatever forms are produced, O Kaunteya, in any womb, the Mahat-Braḥman (Prakriti) is their womb, I the seed giving father”.

Well, the seed, the womb, and the process of implantation – this triad is nothing to do with the normal course of reproduction (copulation) that we might interpret them as! The entire creation takes place by the exchange of bijākśarās (alphabets) between Shiva (Soma, Purusha, Brahman…) and Shakti (Aditi, Uma, Prakriti…).

These aksharas are called as matrikas which we would discuss shortly. In whatever number of articles, I had referred to the above-quoted Rig Vedic verse (RV 9:74:5); I had simply quoted and went ahead with the contextual flow, without ever attempting to explain the hidden meanings behind that verse. The reason was – For the flow of those articles, it was sufficient to know the outward meanings of ‘seed, womb, implantation, and creation’ there (details were out of scope for the context), and secondly, it was simply impossible to explain the meanings as it was not easy to explain them in few sentences.

Their meanings are so deep that their explanations when provided and consolidated – that manifests in the form of a huge thesis and that is what this current article is! Therefore, hopefully, it is clear why it was impossible to elaborate the inner meanings of that apparently simple looking Rig Vedic verse earlier, and why I am elaborating that now.

Not only that, in my article series on Bhagawad Gita where it has been analyzed and proved that Bhagawad Gita is entirely a song singing lord Shiva’s glories and Krishna was just the Acharya (hence Gitacharya); while analyzing a verse from Vibhuti Yoga (BG. 10:33) which says “aksharanam a-karo ’smi | (BG. 10.33)” which means, “among all the letters I am the letter A”, I had not elaborated the secret meaning in its entirety.

The reason is again the same; that is – this small phrase ‘aksharanam a-karo ’smi’ is apparently very small and simple but it encompasses secrets of a gigantic magnitude. The real meaning of ‘a-kara’ is not usually found being elaborated by modern scholars as well as ancient commentators on Gita, and most of them have given only some generic meaning to that phrase.

I believe, only Shankara was capable of understanding the secrets of creation through the alphabet properly, and he had encoded them secretly in Saundarya Lahari as well as Trishati Bhashya. But as they say – ‘when you cannot understand the other person’s thoughts, he would look mad to you’ – this is why those who cannot grasp the greatness of Saundarya Lahari, dismiss it calling it not a composition of Shankara (anyway, we’ll not touch this here since it is out of scope for this work).

However, that phrase of Gita (BG 10:33) when explained in its original meaning, manifests itself as a gigantic article and that article is nothing but the present work of mine!

Brahmanda Purana describes Lord Shiva as ‘Kameshwara’ and Lalita as ‘Kameshwari’. In Lalita Sahasranama Stotra the following references of lord Shiva’s name as Kameshwara are found.

Similarly, in Lalita Trishati, which is again another great hymn from Brahmanda Purana, we find the following references of lord Shiva’s name as Kameshwara.

This has nothing to do with Lord Shiva’s act of burning the cupid God (Kamadeva) to ashes because for that act of his he gained names such as ‘smarārī’, and ‘kāmārī’ which all mean alike, ‘the killer or foe of Kama’. Then what for did Puranas call them as Kameshwara and Kameshwari?

In general, the name ‘Kama’ is seen as the name of the god of cupid who is also called ‘Manmadha’.

The god of love viz. Manmadha is the deity who inspires passion (kama) in the hearts of all creatures and due to that desire (kama), this creation continues to expand through reproduction. For this reason, he is called ‘Kamadeva’, meaning, ‘the deity of desire’.

It is ‘desire’ (kama) which creates offspring and hence is the basis of creation and sustenance.

Kamadeva came into existence as a son of Brahma and his birth is later than the universe. But as per Rig Veda’s nasadiya sukta the cause of the universe (hiranyagarbha) itself is ‘Kama’ as cited below.

What is that desire (kāma) which was the primal seed (retaḥ) and which became instrumental in the creation of the original egg (Hiranyagarbha) which contains all the universes? Who was that original god of desire whose desire (Kama) created the universe?

It was that Lord Shiva, who is beyond all attributes and is the unborn supreme reality, who was the original Kama and because he is the ‘lord’ of the entire universe, he is ‘Ishwara’; hence it is he who is called as ‘kama ishwara’ or simply ‘kameshwara’.

It was he who by resorting to his Shakti Lalita became instrumental in being the cause of the universe. Therefore Lalita being the consort of him she is called ‘Kameshwari’.

How many times I had stressed about the oneness of Shiva and Shakti in all my works I myself cannot count. However, as usual, here also let me remind that there is no duality between Shiva and Shakti. Whatever is Shiva is Shakti and vice versa is also true.

They are spoken differently by scriptures, but in reality, they are one and the same – hence Ardhanarishvara! This is why even though this article is titled on Kameshwara and is intended to explain his nature, it becomes impossible for me to separate Kameshwari’s nature because their natures are identical.

Therefore, in every section of this article, we would find both Kameshwara and Kameshwari running in parallel.

Vak that is found in Vedas in its original state is Para-vak and it is the one who is called Tripurasundari. The entire creation came out of the fourth part of lord Shiva’s Vak (Shiva is the Purusha) and that vak is the Vedas. Since Shiva and his vak are inseparable, Vedas say the fourth part of Purusha manifested as the world.

Also, since the Purusha (Shiva) and Vak (Tripurasundari) are one and the same, Vak is also glorified as the cause of creation in Vedas and it is said that the fourth part of Vak is all this creation.

Since this Purusha (Shiva) was the original Brahman whose desire created the whole world, he is called Kameshwara and for an identical reason when looked at Brahman as a mother, it is Tripurasundari who created everything through her desire (remember again, they both are one and the same); hence she is called as Kameshwari.

We’ll unfold these secrets one by one now.

The article has been republished from the author’s blog with permission.

Santosh Kumar A, is an IT professional working as a Project Manager in a leading IT Company. His heart however lies rooted in the scripturesRead more