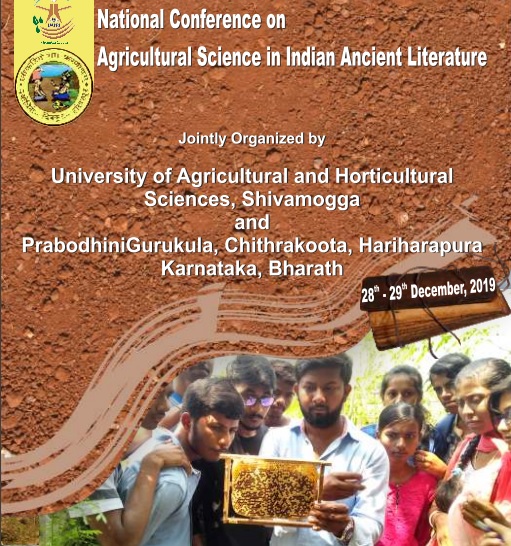 Extract from the brochure published below

(Food is available from grains. There is no grain if it is not cultivated. Therefore,
essentially we must practice agriculture on priority.)

In this shloka, sage Parashara emphasized the importance and potentiality of agriculture for our survival. Insight into the history of Indian Agriculture, its growth and development will help us in realizing the Indian agricultural heritage. Agricultural knowledge dissemination began with the rise of agriculture. With the invention of wheel, plough, and irrigation around around 3000 BCE, agriculture development got new momentum. During the periods of Harappa and Mohenjadaro civilization, skills to cultivate many grains were evolved which is yet another milestone in the history of agriculture. Then the systematic documentation and dissemination of agricultural knowledge was initiated from the beginning of Veda period. Agriculture in pre-independence period, came out of the Indian framework and took a different path from culture to industry. The same is being continued after independence. Growth of population, successive droughts, food shortage and increasing starvation and deaths subsequently led to green revolution. High yield and high income became our main target of today's agriculture.

As we begin to understand the implications of this agriculture, the good aspects of our
ancient agriculture began to emerge. Over the last two decades, diverse school of thoughts emerged, such as Organic Farming, Natural Farming, Sustainable Agriculture, Bio-dynamic Agriculture, Parma-culture, etc. The desirable feature of our Indian agriculture should be an appropriate blend of all good, eco-friendly concepts from our traditional knowledge with that of modern new innovations. The British laid the foundation for today's agricultural education. In the process of designing the agriculture education, they did not give due considerations to Indian agriculture wisdom, knowledge and cultural heritage. It is ironical that even after independence we did not refer to our traditional agriculture or our knowledge base of agriculture.

Hence a National Symposium is organized with the aim of bringing together the ideas of agricultural science in the ancient literature of India and present developments in the field of agriculture and to communicate Indian agricultural heritage to the rest of the world on a strong scientific footing.

Objectives of the conference are-